The AIOE programme committee will work on promoting both the question of teaching artificial intelligence to all in an open way and the impact of AI tools in favour of open education. This will include organizing events (workshops at conferences, being present in panels,…), enriching the general knowledge and understanding of these questions through promoting research, making important pieces of work visible and available. The goal is also to support the legacy of European projects important to these issues, as is the case of X5-GON. 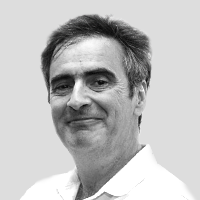 Colin de la Higuera is Professor at Nantes University (France). He has been involved in a number of research themes, including algorithmics, formal language theory, pattern recognition. His chief interest lies in grammatical inference, a field in which he has been the author of more than 60 reviewed research papers and a monograph, “Grammatical Inference: Learning Automata and Grammars”, published in 2010. He has also served the community as chairman of conferences, expert, reviewer, editor. He has co-organized workshops and given tutorials at ICML, IJCAI, ACL, … He has been chairman of the International Community in Grammatical Inference (2002-2007), the founding president of the SIF, the French Informatics Society and is currently a trustee of the Knowledge for All foundation and is working towards the usage of technology for an open dissemination of knowledge and education. In 2017, based on the project Class’Code he contributed to launch in France, UNESCO has created a Chair in Technologies for the Training of Teachers by Open Educational Resources at University of Nantes, which he is now holding. In 2019 an Academic Chair on Open Education and Artificial Intelligence was created by Nantes University to support his work. Since 2020 he is Chief Equality Advocate at IRCAI.

BACK TO PROGRAMME COMMITTEES